Jake West The Keeper of the Stones 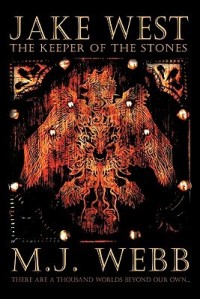 Digging in his grandfather’s attic, Jake and his best friend, Ben, accidentally open a box that releases an ancient power and awaken another world. Soon, both are thrust into an adventure and an old rivalry between two brothers that are vying for control over the throne.

For this book, it’s a bit tricky. On the one hand, the author has an amazing use of words and writes a nice tight sentence. That is to say, there were few flaws grammatically.

Despite all of this, there is still something missing. For starters, he tells more than shows. When this happens, my attention drifts, especially when the telling is adjective-laden. Check it out.

Perkinar mine had also fallen in an astonishing feat of bravery and skill. However, by the time the mine was totally subdued and set ablaze…

As you can see, there are nice words in there, but there’s noting palatable for my sense to grab onto. On top of that, it’s in the past perfect sense, which slips it even further away in perspective. And it doesn’t end there. When you shift over to dialogue, you see that a lot of what they say is either awe-struck praise for the two protagonists, or stereotypical of the characters’ roles. To make matters worse, no person ever asks one question—but a thousand questions at once! It’s baffling.

Here, too, there are problems. The two characters we should love—Jake and Ben—come off unbelievably similar and sound like unintelligent seven year olds most of the time. It’s hard to believe, but they are actually fifteen years old!

As for the two warring brothers, Vantrax, the evil one, feels the most developed. After the love of his life is married off to his brother, Vantrax goes nuts. There is actual justification for his hatred, but then, every time he speaks, he spews the vitriolic banter of a common villain.

Furthermore, every character speaks and acts as if from some middle age novel, which would make sense if this were about the middle ages. However, most of the story takes place in another dimension, clearly not Earth or in the past, yet somehow they speak middle age and use middle-age weapons! I’m not sure where that logic comes from.

Structure-wise, it wasn’t too bad. Every chapter, for the most part, had events. True, about halfway through, some areas began to drag, but in the beginning, a lot happens and fast. For this reason it wasn’t as bad as it sounds. It moved at a quick enough pace, but…like most new writers, the author quickly began to repeat himself. There were many instances where we hear one character telling us again why he is doing what he is doing.

Added to this, the author gives such extensive info dumps on the characters backgrounds in the beginning that it gets a little overwhelming. If anything, the writer should’ve given us this knowledge slowly through dialog or actual story action. That way, his repetition problem would be cut down on with new, good pieces of the past.

I did give this story a three. And mainly it was because it read fast, and the text wasn’t necessarily riddled with errors. When that happens, no matter how many other mistakes happen, it does help ease the pain. Nonetheless, there was too much telling and not enough showing, large info dumps in the beginning, and dialogue that needed going over to strengthen. So, all in all, I stand by my score, though I wish I could’ve made it higher.

Check out the book, here.

2 thoughts on “Jake West The Keeper of the Stones”