Hearing another’s comments on the deluge of low quality, unoriginal writing (ie. shit) caused by self-publishing in the ilk of Amazon and the Internet, I find it hard to completely agree with this thinking. Although Alexis de Tocqueville reviews our method of majority-rule to be less than desirable.

“The moral authority of the majority is partly based upon the notion that there is more intelligence and wisdom in a number of men united than in a single individual, and that the number of the legislators is more important than their quality.” (Tocqueville)

In that way, it may be true that the same drivel is reproduced and slurped up by willing readers/watchers–the indomitable ‘dumbing’ of America–that a fellow writer complained about. Seeing this happen seemed to make her disheartened and, maybe, a little disappointed as well, in readers as a whole. After all, when the majority is involved, it tends to sift to the lowest, simplest form–the definition of mass. And that’s where my thoughts diverge. 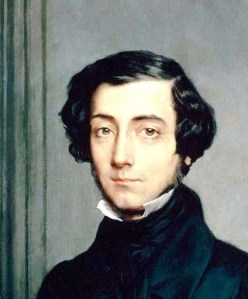 “A stranger does, indeed, sometimes meet with Americans who dissent from the rigor of these formulas, with men who deplore the defects of the laws, the mutability and the ignorance of democracy, who even go so far as to observe the evil tendencies that impair…”(Toqueville)

Where does it diverge to? The opposite. And with it, I cannot always say the view is much better.

The majority is responsible for many mistakes in history (the holocaust, slavery, etc.) but the alternative is leaving this decision-making up to an individual or an amalgam of people acting individually to discern what ‘is or is not’ to be created, followed, and distributed. The strong point of letting the majority speak is that even the voices from the fringe have their airtime, despite the din with which they must compete. A solitary deciding figure robs the ability to gain an audience for any voice that deviates from the Salon. Then a private gallery is needed–is that not the Internet?

I’m no blind freedom-toter, brandishing the “f-word’s” use anymore than its more infamous ‘F’ brothers. But coming from a country that boasts its freedom like a pledge–does it not make sense that when it comes to culture–in the extent of media in all its forms from music to writing–that the choice for what we want be left up to us, rather than be presented with a menu of pre-selected items?

Even the first restaurant-goers most likely applauded the opportunity to waffle over a second entree.